Smaato supports the integration specifications for OpenRTB 2.2, 2.4, or 2.5.

We have also provided example requests and responses to make it easier for you to understand the integration and auction process. Please refer to the specific OpenRTB version page and formats.

The following figure illustrates the OpenRTB interactions between an exchange and its bidders. Ad requests originate at publisher sites or applications. For each inbound ad request, bid requests are broadcast to bidders, responses are evaluated under prevailing auction rules, and a winner is selected. The winning bidder is notified of the auction win via a win notice. Ad markup can either be included in the bid prospectively or in response to the win notice.

A separate billing notice is also available to accommodate varying policies enacted by exchanges that are beyond the scope of the OpenRTB specification (e.g., billing on device delivery, viewability, etc.). The win notice informs the bidder’s pricing algorithms of a success, whereas the billing notice indicates that spend should actually be applied. A loss notification is also available to inform the bidder of the reason their bid did not win.

The URLs for win, billing, and loss notices and the ad markup itself can contain any of several standard macros that enable the exchange to communicate critical data to the bidder (e.g., clearing price).

Demand partners can configure their entire ad markup in HTML. Smaato requires the “w” and “h” parameter inside of the bid object for HTML ads to ensure bid requests and response sizes are matched.

You can find an HTML ad markup sample:

The ad markup must be compliant with Smaato’s RTB ad markup XML standard as defined in the XML schema document. Demand partners must comply with ad markup standards of rich media and image ads.

When bidding with a rich media ad, we suggest putting the content of all XML tags (e.g.<content>, <beacon>, <clickURL>, <imgUrl>, etc.) in a CDATA construct. CDATA in XML requires no encoding whatsoever. Passing an XML document in a JSON-context, however, needs JSON syntax and escaping rules to be applied, as follows:

The allowed request duration for each auction is indicated in the ext.tmax field in the bid request. Any response received after that timeframe will be ignored. The default setting for request duration is 300 ms (round trip) but there are many requests that are lower. We recommend our partners’ response time be below 100 ms in order to have access to latency-sensitive inventory.

Smaato expects all buyers to be compliant with the secure field in the bid request. Demand partners should return secure creative markup assets when “imp.secure”:1

Smaato has data centers in US-EAST (Virginia, US), EMEA (Ireland), APAC (Singapore), and CHINA (Beijing). We require all buyers to provide regional endpoints for the markets they would like to buy media from.

For ad quality purposes, we require our demand partners to provide the following information in bid responses:

Smaato only charges its buyers when the Smaato impression beacon fires. This happens when an ad container is presented to a user. In other words, you will only be billed when Smaato verifies the impression and the ad is displayed. The win notification will be fired from Smaato servers right after the ad is viewed. We highly recommend all buyers to record impressions based on win notifications.

Smaato billing is purely based on win notifications. Please make sure that you always provide then url in the bid response.

At Smaato we offer our buyers open auctions and open deals, as well as private marketplace preferred deals and private exchange deals.

All current Smaato open auctions utilize OpenRTB at 2 parameters. The winning bidder only pays the second-highest price in the auction. Smaato is planning to support first-price auctions in the future.

Buyers can package Smaato inventory via Smaato’s self-service portal (SDX) and assigning a specific deal ID and seat ID to it.  Open Deals work in a similar fashion as Open Auctions, as they also utilize the second-price price auction model.

Private exchanges are a closed-exchange setup where only a limited amount of DSPs (up to 25) can bid on a publisher’s inventory. The Bid Floor and Deal ID are passed in the bid request. The DSP with the highest bid wins the auction and pays the second-highest price.

You can find the example private marketplace (PMP) requests and responses for OpenRTB 2.5 here.

After the credit, contract, and tech questionnaire are completed, Smaato will create a test account for a new buyer. Testing contains two stages: the Bid Response Compliance Stage and the Traffic Validation Stage.

The purpose of this stage is to validate the demand partner’s responses for all eligible ad types and buying methods (OpenRTB, Prefered Deal, Private Exchange).

The purpose of this stage is to ensure that there are no discrepancies in ad requests, impressions, and revenue. 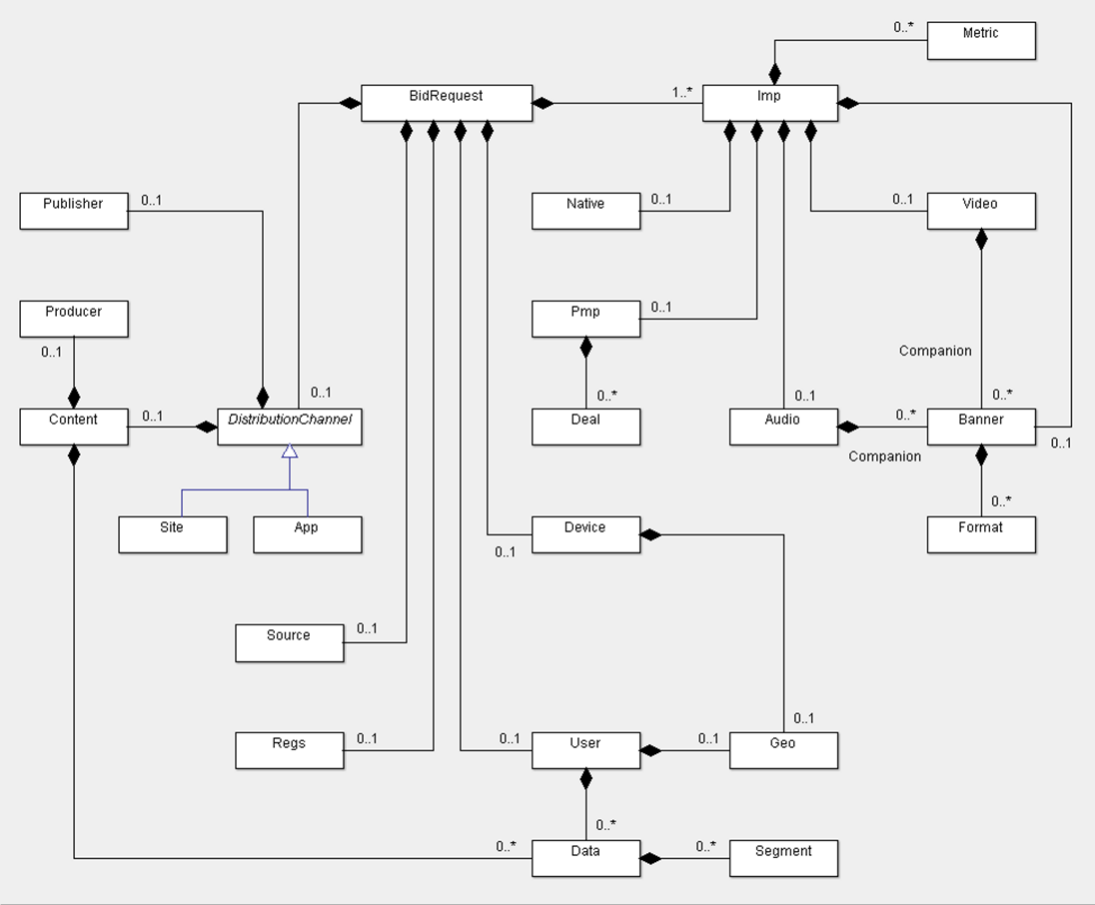 Further information about OpenRTB can be found here in the Developer Documentation under OpenRTB Integration and/or the example requests and response pages.